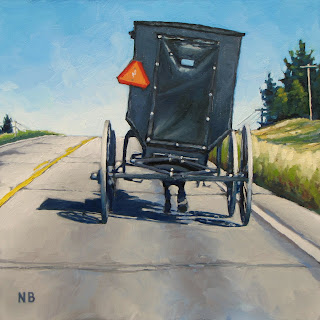 If you see an Amish buggy, you must attempt to paint it.
That's a rule, right? ;)
This is another scene from our summer road trip, this one in rural Minnesota, not far from my parents' home.
I really enjoyed painting it.

Also, clearly the horse and buggy are about to crest a hill, right?
Proof once again to my mountain-state husband that Minnesota is NOT flat. ;)
I grew up riding bicycles on those roads, I would know. :) 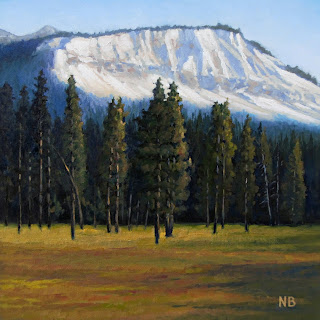 From one of our very favorite days of Summer 2015...
We deviated from our normal Oregon - Minnesota road trip route to spend an afternoon driving through Yellowstone Nat'l Park. (Not the recommended way, of course. You could spend a whole summer there and still have more to see.)

The afternoon started spectacularly when, five minutes after passing through the west entrance, my husband spotted a bull elk running along a river. We pulled over in a parking area and watched as it grazed along the water's edge. Then, as we were about to move on, the elk meandered away from the water, munching his way directly to the passenger side of our car!
It was easily the highlight of our day. (Sorry, Old Faithful!)

This scene is from the east side of the park, at the close of our day. So many beautiful memories. ;)

From last Sunday - five minutes into Yellowstone my husband spotted this bull elk running along the water. We stopped and watched him for a while, and then he just grazed his way right up to my window. So cool! #yellowstone #yellowstonenationalpark #elk #bullelk #elkantlers #wildlife #antlers
A video posted by Nora Bergman (@norabergman) on Aug 27, 2015 at 10:49am PDT 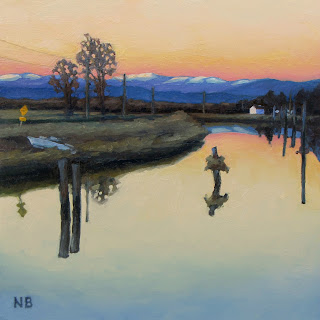 In the late afternoon of New Year's Eve, I herded my three boys into the pickup for a quick trip to the store for junk food and root beer float supplies. As soon as we were all buckled and I had a chance to look at my surroundings, I quickly decided to take a little detour to the Columbia River dikelands just outside of town.
The sun was setting and the sky was just gorgeous.

The boys started questioning, of course, and then the middle one yelled, "We did this last year!"
I had forgotten, but he was right. Exactly one year ago, we had left the house to go to the store and I drove out to the dikelands to take pictures instead. :)

I had tried making a painting from those images a year ago, but eventually set it aside in frustration. Yesterday, it caught my eye from the top of my 'no hope whatsoever' pile, and I decided to give it another shot. This time around, I referenced my photos from '15, instead of '14. Both days were very cold and clear, and the sky absolutely glowed as each year came to a close.
The only noticeable difference in the photos is the result of our very different winters; '14 was super dry, and '15 was super wet, resulting in snow at the very top of the distant hills.

Snow in the hills for the win! 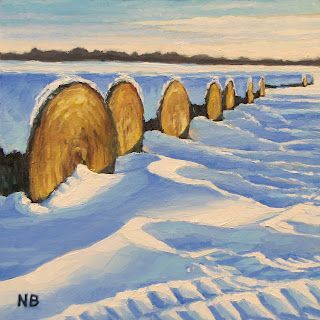 Hi, guys!
It's been too long!
I don't think I mentioned it here on the blog, but I was injured in a car accident right before Thanksgiving, so I haven't felt up to painting for many weeks. Thankfully, I'm doing much better, and finally cleared out my painting corner last week, -- ahhh, it felt so good. :)
I mean, until I started painting and felt like I was learning how to do it all over again. ;)

Oh, also, just wanted to remind you that I do have a handful of 2016 calendars left, purchase information is here. (Or click on the calendar tab in the menu above.)

Thanks for being patient with me and happy New Year! 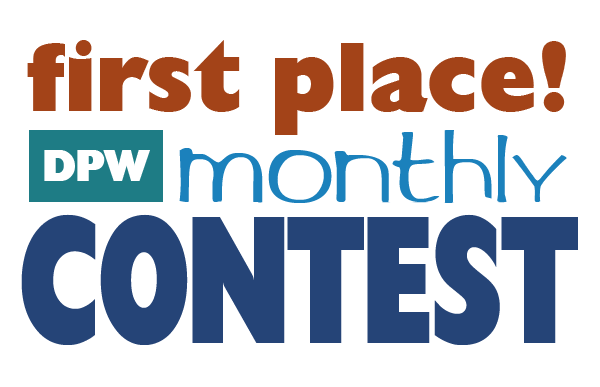